Sidewalks Still Blocked After A Month

The Blizzard of 2016 struck Montgomery County, Maryland, on January 23.  On February 26, the snow had long since melted almost everywhere.  Except for where snowplows clearing roads had piled it high on the sidewalks and corner curb ramps.  After more than a month, there are still places where pedestrians find sidewalks blocked. 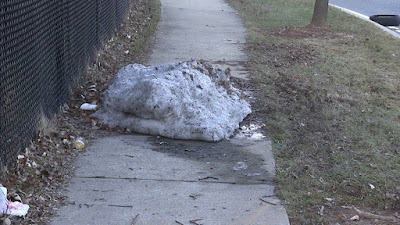 On Old Georgetown Road, snow piled on the sidewalk after the January 23 storm still forms a barrier on February 26. 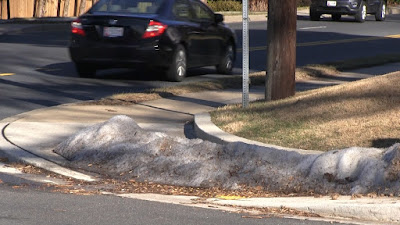 On Montgomery Avenue, snow piled at the corner after the January 23 storm still blocks a curb ramp on February 26.

For those who missed it, here is my report on snow blocking sidewalks on February 7, two weeks after the blizzard:

When the sidewalks and curb ramps are the official snow storage areas for snowplows, you have a system designed to fail.

Another ped button beyond reach from the sidewalk


This pedestrian button is by the Walter Reed National Military Medical Center in Bethesda, Maryland.
Posted by John Z Wetmore at 10:54 PM No comments:

A full two weeks after the blizzard ended here in Maryland, the snow is almost all gone.  EXCEPT for where the snowplows piled it up onto sidewalks.  It's a system designed for failure.