Posted by John Z Wetmore at 9:14 PM No comments:

We travel to Vicksburg, Mississippi, where an old bridge is closed to pedestrians.

Posted by John Z Wetmore at 9:05 PM No comments:

Posted by John Z Wetmore at 9:03 PM No comments:

The Association of Pedestrian and Bicycle Professionals Lifetime Achievement Award:


"The Lifetime Achievement Award recognizes an individual who has made a substantial commitment to the profession during his or her lifetime and who has shown excellence in the field of bicycle and pedestrian planning, design, advocacy, and/or education. The award distinguishes those whose vision and determination have made their communities better places to bicycle and walk and who inspire the rest of us. This award is open to both APBP members and non-members who have contributed to our profession. A person may be nominated posthumously, after retirement, or while still working in the field."

Over half of the winners have appeared on "Perils For Pedestrians".  (To go directly to an interview on any of the YouTube videos, click on the timecode in the individual video description on YouTube.)


2016  Barbara McCann, Director, Office of Safety, Energy and Environment for the U.S. Department of Transportation

Posted by John Z Wetmore at 2:12 PM No comments:

There is a lot of construction going on in Bethesda, Maryland.  Eventually it will result in a lot of jobs and housing within walking distance of the Purple Line and Red Line stations.  In the meantime, the sidewalk closings are a major inconvenience for pedestrians, often requiring pedestrians to cross major streets multiple times to get to their destination. 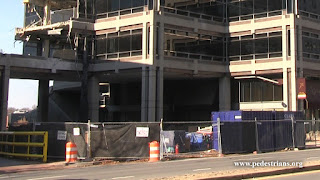 For those who are curious, this is what the foundation for a tower crane looks like.  The four mounting points are set in several feet of concrete. 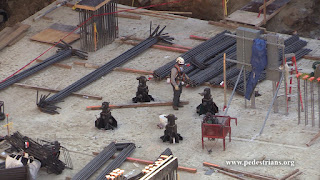 And here is the process of the tower cranes being erected at the site of the new Marriott International Headquarters Building.

The Purple Line and Pedestrians

The Purple Line is a light rail transit system connecting Montgomery and Prince George's Counties in the Maryland suburbs of Washington, DC.  It is currently scheduled to begin operations in 2022.

The Spring Center strip mall on the east side of 16th Street in Silver Spring was demolished to make space for the Woodside Purple Line Station. 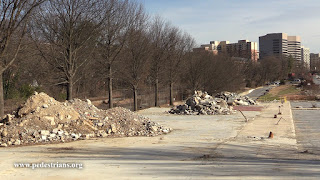 There are several large apartment buildings across from the Woodside Station on the west side of 16th Street. 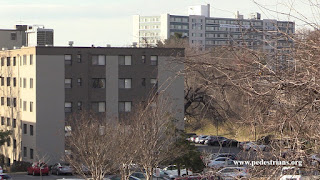 But the sidewalk on the west side ends at Spring Street. 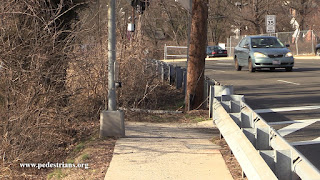 There is no sidewalk going past the apartments. 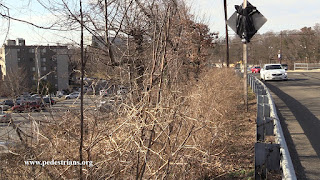 The sidewalk picks up again on the bridge over the railroad tracks. 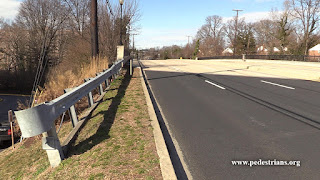 But then ends as soon as you finish crossing the bridge. 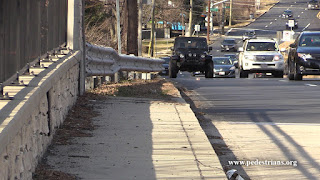 There is no more sidewalk on the west side until you reach Lyttonsville Road. 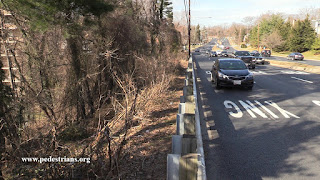 What would it take to have a sidewalk in place so that the thousands of residents on the west side could walk to the Woodside Station on opening day in 2022?  Working backwards, the sidewalk would have to be built in 2021.  So funding would have to be put in place in 2020.  So planning and design would have to be completed in 2019.  That doesn't leave much time for bureaucratic inertia and delay.  Will Maryland, Montgomery County, and the Purple Line Transit Partners be able to work together to make it happen?